Nicky was diagnosed with an autism spectrum disorder shortly after his third birthday. When he was a child, he had a difficult time adjusting to new environments, especially areas with a lot of noise and frequent movement like airports that made him feel uncomfortable and anxious, leaving his parents Kyle and Irma feeling powerless. That experience is not unique among families with autistic children; for this reason in recent years, airlines like UNITED has joined to a nationwide organization called “THE ARC”, which serving people with intellectual and developmental disabilities in the WING FOR ALL programme. They are immersion sessions designed to give children with autism a greater level of familiarity and comfort when traveling.

Opening up the World for Children with Autism

When Nicky’s father, Kyle, heard about a special programme at Houston’s George Bush International Airport in 2014, he took advantage of being a volunteer. Twice a year, he looks as a pilot to help lead a Wings for All group (The name varies by city) on a dry run through the airport, from the ticketing area, through security, to the boarding gate and onto on of our parked aircraft. Once on board, they put on a mock flight.

Kyle can recognize in the kids the same fear and anxiety that he once observed in Nicky. Thanks to his unique personal connection, he’s able to reassure them and their parents that, with enough practice and a patient approach, anything is possible. The father says that there is a boy who has gone many times but never can get down the jetbridge; last time he made it all the way onto the plane and that was a big accomplishment. These families keep going back and each time make a small improvements.

Nicky’s family didn’t have a support system like Wings for Autism/Wings for All when Nicky was young and it was hard for them. Eventually, through perseverance, they helped him become a flyer, with a passport book that’s filling up with stamps.

“We didn’t want Nicky to only see the world through books,” Irma says, “we wanted him to see it for himself. He loves flying now, and I feel like we don’t have any limitations.” That’s why Kyle always goes back to Wing for All every year and he has the hope that other families can reach that point.
“Getting their child onto an airplane for the first time means that maybe one day they can visit Grandma or go to Disneyland together. You can’t measure the impact,” he says. 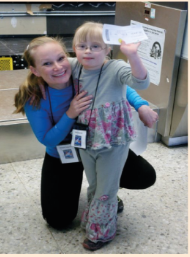 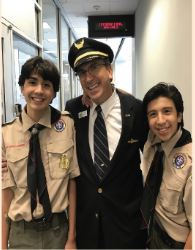